The Rites of Spring

The aforementioned activities describe the annual mating rituals of toads and yours truly attempting to photograph the proceedings. For several days each Spring, toads descend upon local ponds and lakes in an effort to insure the continuation of their species. The males arrive first and begin calling in order to attract females. So ardent are they, that I have seen them grab ahold of virtually anything within their grasp including other males, my tripod and even a friend’s leg in one case! When the males are lucky enough to find a real female, their love knows no bounds and groups of males may hold on to her, or each other, in a behaviour known as amplexus, with reckless abandon, even to the point of drowning the female on some occasions. These mating balls are known as knots, not nots or naughts…but knots. Most toad mating proceeds in a more evolutionarily adaptive way, with a single male and female. The female lays a long string of eggs, often helped out of her body by a male’s hind legs, with the male fertilizing the eggs as they emerge. During these days of anuran passion, I often find myself laying in the mud with these creatures, observing and filming the amphibian antics. So distracted am I at times, that I have discovered later that huge leeches have been robbing me of my blood while I have been submerged, as evidenced by the streaks of blood running down my legs when I emerge from the water, the leech’s anticoagulants still having their effect. 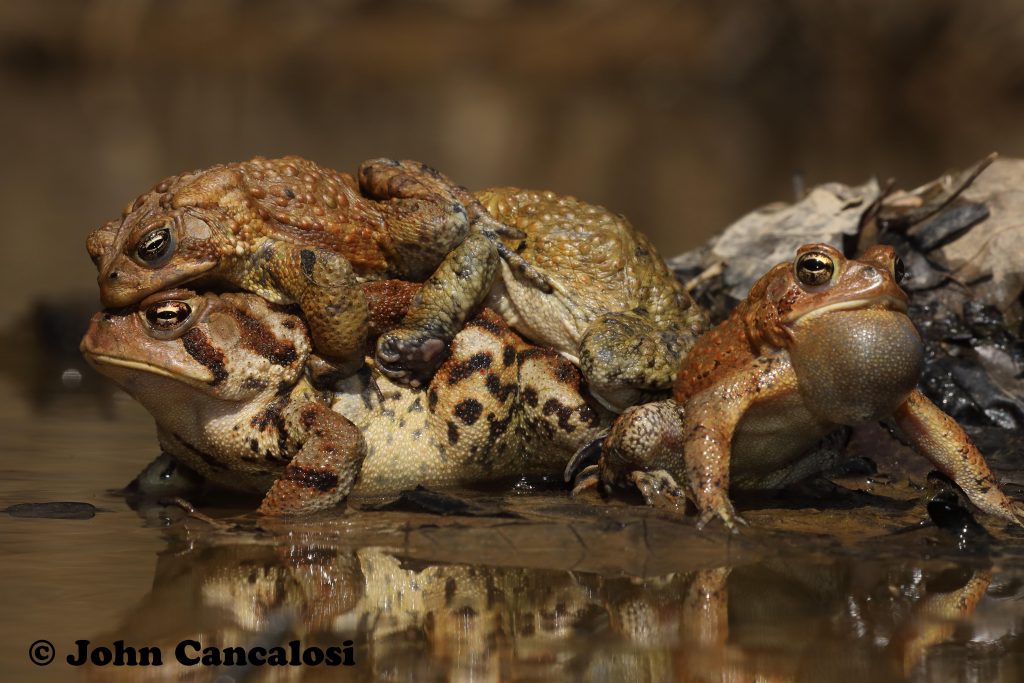 In a couple of days the whole spectacle is over and the toads go about their more mundane duties and I have a chance to wipe the mud from my body and my equipment, ready to repeat the process the following Spring.