An Inordinate Fondness For Metals – Metals Minerals Mines and Me

Nature has been my passion since early childhood.  Therefore it was an

basic truths about reality; namely that metals constitute the majority of the basic ingredients in

the Universe and that metallic minerals, and the metals that they contain, make modern 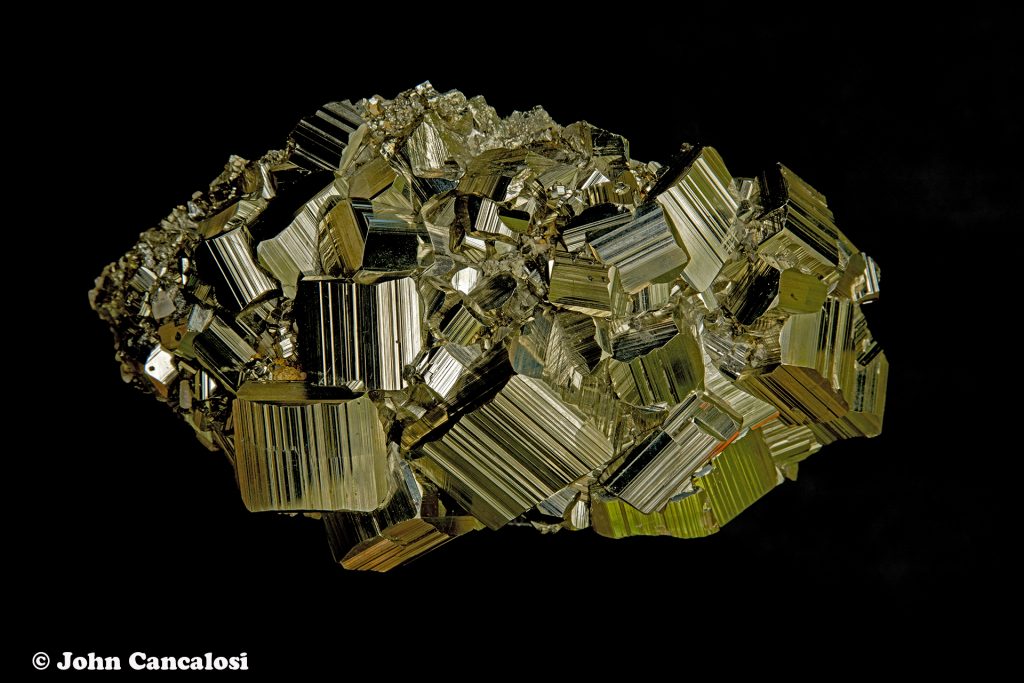 The latter truth should be evident to everyone, but many are surprising oblivious to our utter

dependance on  metals, much as I was before my “metallurgical enlightenment.” This

human survival is linked to the earthly bounty hidden below our feet. 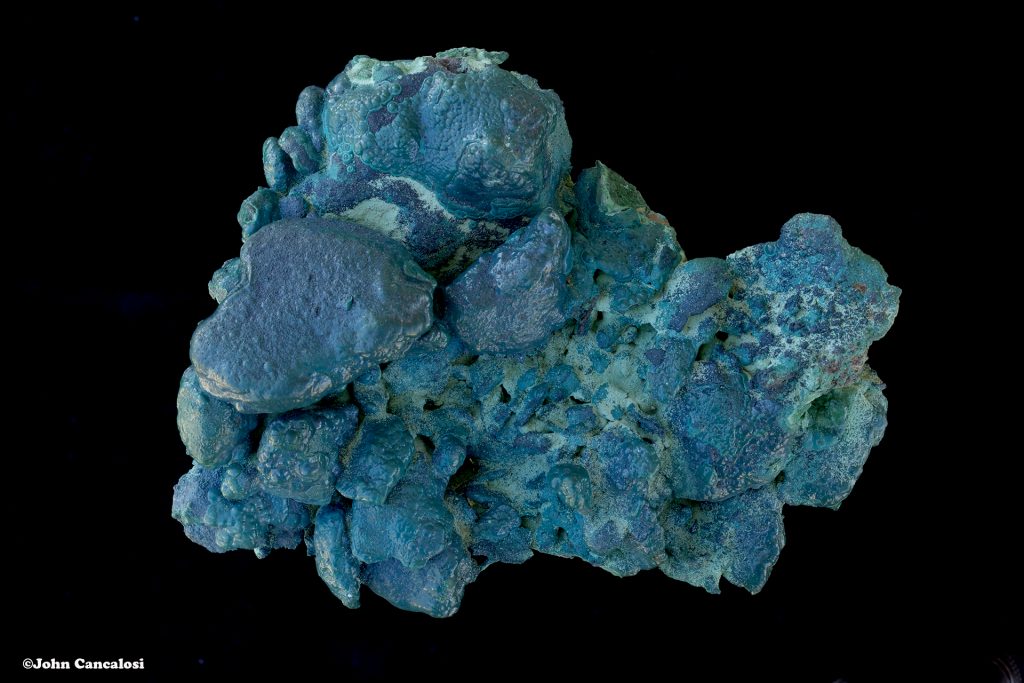 Since ancients first extracted copper from colored rocks around their fires, humans have

compounds from their mineral hosts. We all learned that the major periods of societal

It seems that many people assign this linkage of man and minerals to history, and don’t realize

that we are more metal-dependent now than ever. Consider that an average American over the

and nowhere near all that is required to make modern life comfortable. Our computers, for

example, contain over 65 minerals, and cars… forget it. Mineral-derived metals are either

found in or used to produce virtually everything in our modern day surroundings.

I have pondered  what life would be like without the modern conveniences. No matter how

optimistically I tried to imagine my Stone-Age existence, I concluded that  I would be lucky to

survive a few weeks. Yogi Berra’s wise saying “The future ain’t what it used to be” could be

applied to the likely outcome of my ill-fated primitive existence.  To that I would add “The past

ain’t what it used to be either.”

The periodic table, is a catalogue of all the basic stuff, the known elements, that exist in the

universe. To me, the elements, and the way they behave are the fundamental tracks left behind

by whatever made the “world” around us, from a great big cosmic nothingburger.

Since humans have been humans, we have debated our origin with no universal consensus as

yet attained. As we all know, people can be pretty particular when it comes to their own view of

creation and have been known to wage war to defend their opinions. I will not enter this debate

but will offer an indisputable clue on the subject, toward which we might all unite and focus

our attention. Drum roll please… Since the vast majority of the elements are metals or

metalloids, I can say with certainty that whatever forces gave rise to the universe had an

Having brought attention to our common, metallic roots, I must admit the sad fact that many

silver and copper are three notable exceptions, and each can naturally form some of the most

amazingly beautiful objects that the Earth has to offer. Of course humans have obsessed over

gold through the millennia, but my personal favorite are the reddish, branching, plant-like 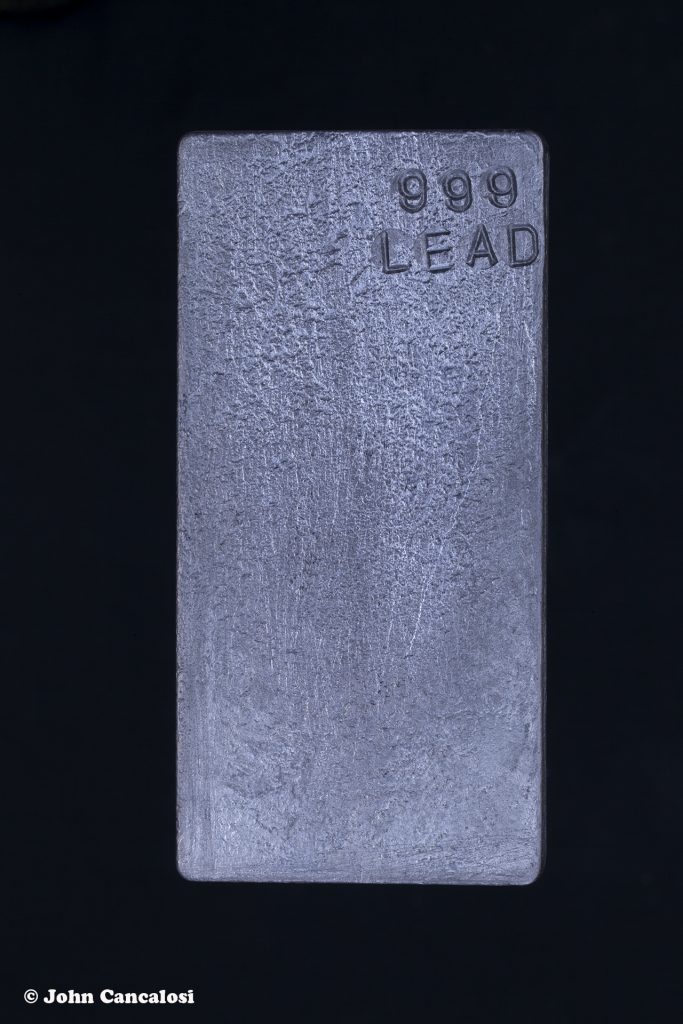 However, it wasn’t the metals  that first captured my attention, it was the spectacular minerals

that are created when metals combine with other elements, including other metals. 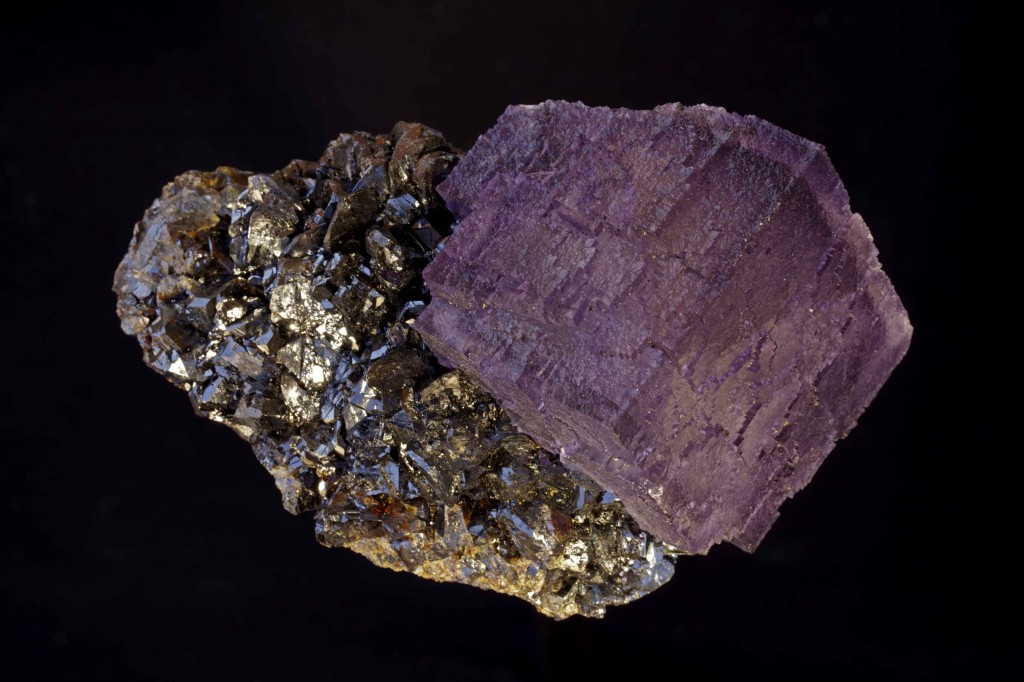 My eyes were drawn by the beautiful form and color of fluorite, the seductive green of

malachite, the rugged look of galena and the graceful curves of kidney hematite. I began

collecting minerals and from the shelves, they beckoned me to learn more about them. It

became apparent early on, that almost every one of them contains metals that are used to

Copper in malachite is used for just about everything electrical, the lead in galena is used to

make car batteries among other things, while the iron extracted from hematite forms the

skeletons of cars, buildings and tools. 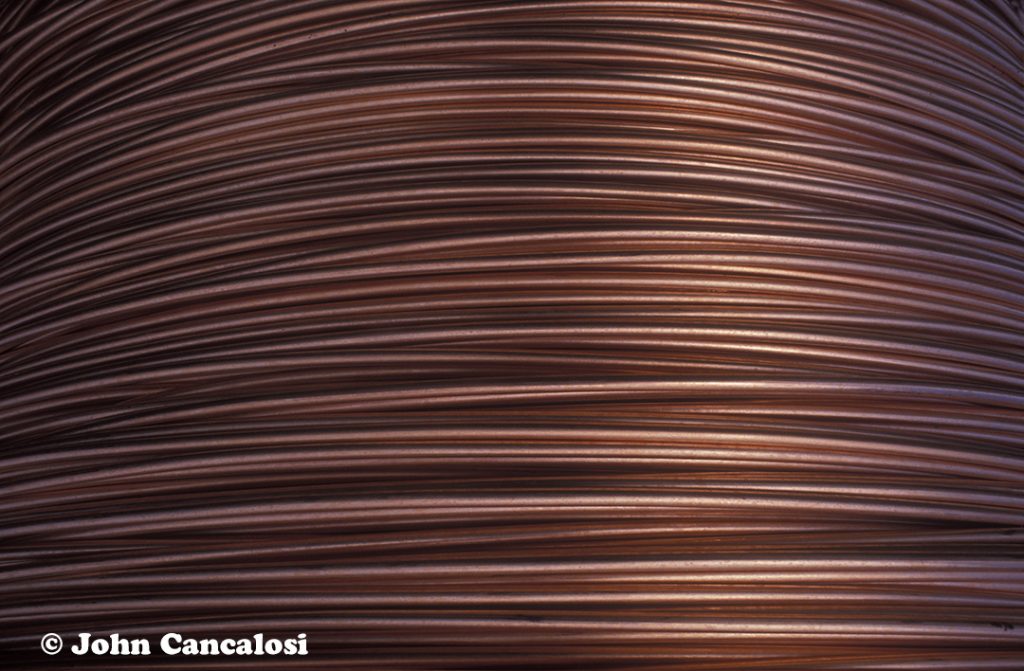 mundane household objects, for some it is enough to know that electricity comes from outlets

and that tools come from hardware stores. 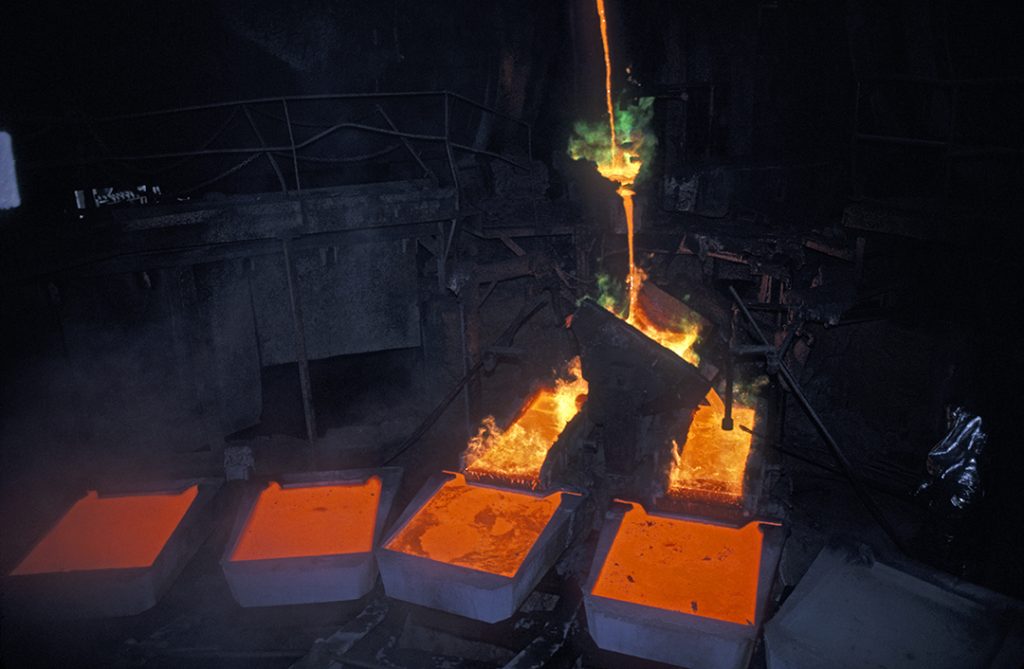 evolved over the course of deep time. Apparently minerals, like living organisms can become

“extinct”. Unlike with their living counterparts, extinct minerals can come back to

“life” should conditions change.  The evolution of  life and the consequent

mineral-rich corner of the known universe. 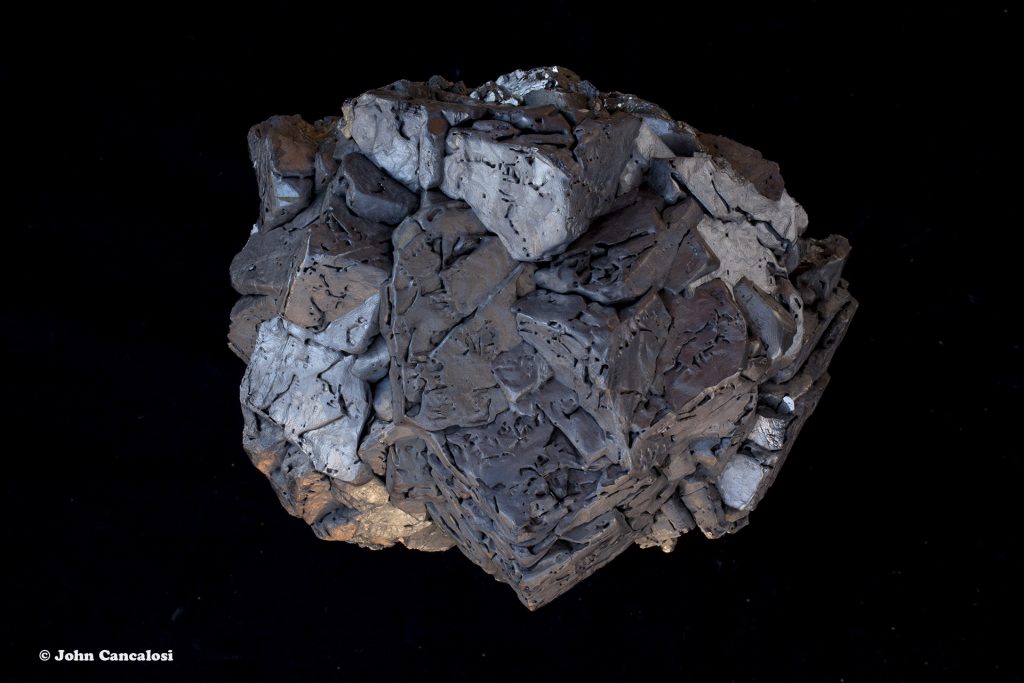 The messy business of mining is an inescapable part of human existence today, as it has

been for thousands of years. Some of my earliest childhood memories are of the smoldering

mines. He lived a harsh life and died relatively young, probably due to the horrendous

conditions in the mines. Still, as messy as mining can be, none of us would be here without it.

Of course, there are right and wrong ways to do mining and places where mines simply don’t

belong. Mark Twain described a mine as “a hole in the ground owned by a liar.”

However, Twain, by his own account, received his comeuppance from a miner in Red Dog

California in 1866. He was about to address a group of gold miners when one of them was

enlisted to introduce him. The miner reluctantly obliged and said that he didn’t really know

Twain but could at least say two things about him: “One is, he has never been in jail; and the 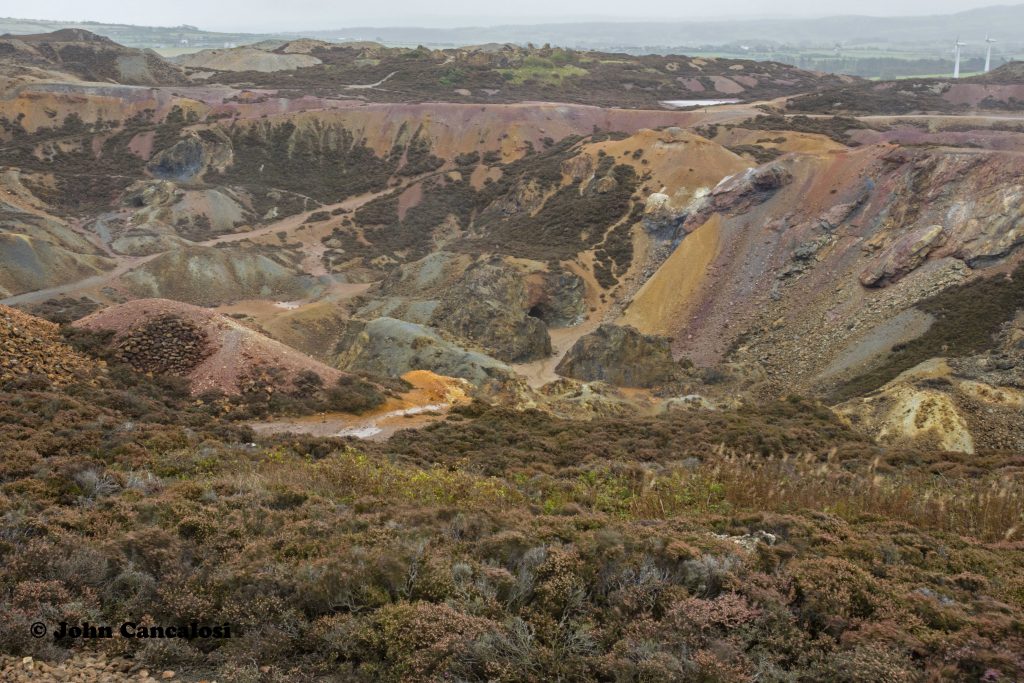 British anthropological museum. I had twenty minutes to see a vast collection before closing

time, and  didn’t have time to digest what I was seeing. However, the significance  of what I

saw caught up to me upon later reflection. I couldn’t help but think about the number of

devices made from metal that people have used over the centuries to subdue other humans,

from swords, cannons and caltrops, (which I had never heard of), to modern day rockets and

jets. Although there have been massive volumes written on the subject I now submit my

summary of this aspect of history with the following alliteration: “Men Who Master Metals

Master Men.”  This catchy phrase can be used to explain the outcomes of most geopolitical

events, including  conquests and wars and saves the time of rummaging through the musty

tomes that have been devoted to such historical matters.

On the same trip to Britain I was nearly blown of the mountain at the Parys mine in Wales,

where copper has been mined since the early Bronze Age, nearly 4000 years ago.

eventually led to the Industrial Revolution and the advent of the modern creature comforts.

Sadly, during the dark days of slave trading, copper from the Parys mine was used to make

millions of bracelet-like manillas, which were used by British merchants to buy slaves in Africa. 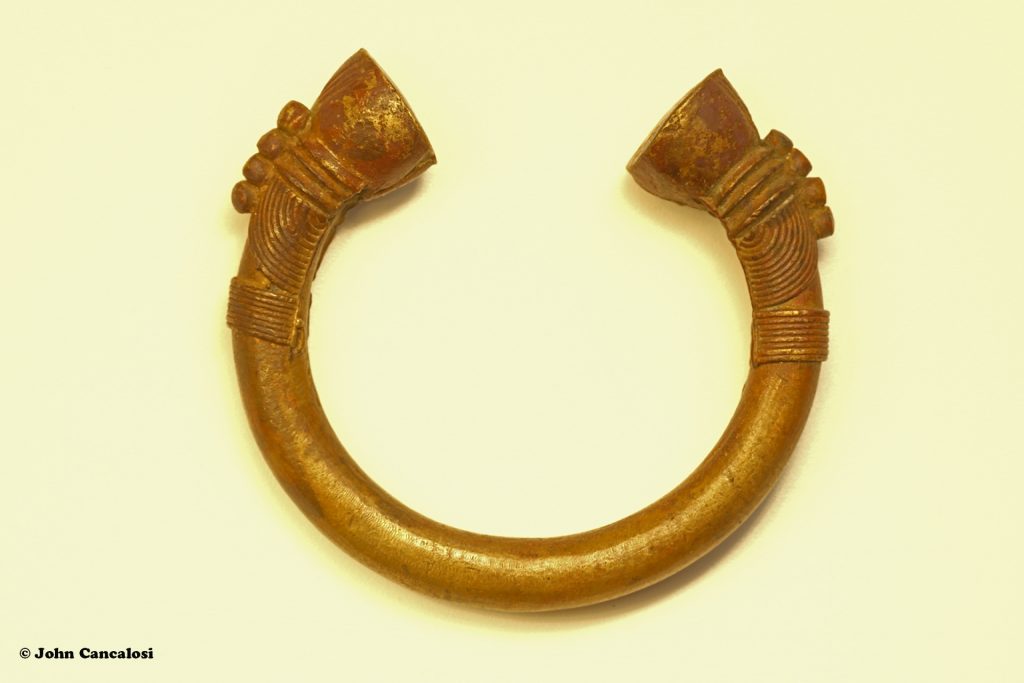 At the nearby ancient copper mines on the Great Orme, Bronze Age miners dug

public. There I saw the marks that they left in the walls with their primitive bronze tools. These

experience since the dark recesses of humanity.

Lancaster County, Pennsylvania. Here, I struggled to pick out the few words of German that I

recognized and keep from falling asleep during the lengthy proceedings. The family that I was

of the country’s  nickel during the 19th century. All that is left of the once thriving operation is

the vast deposit of slag left over from the smelting process. 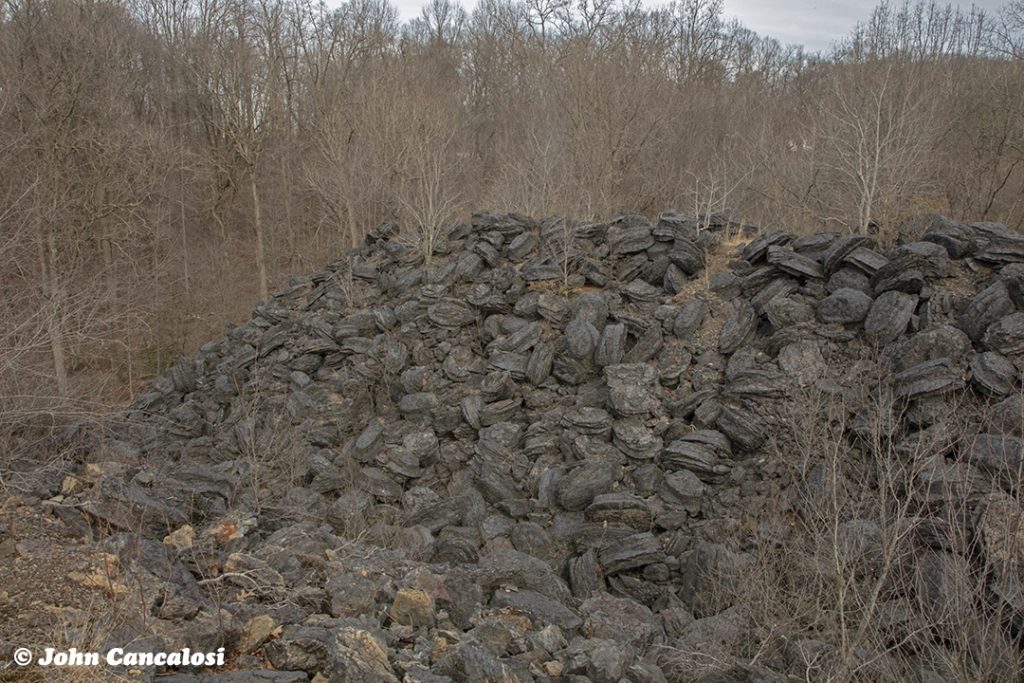 The bathtub sized chunks of slag, some of which now decorate my front yard, are surprisingly beautiful. 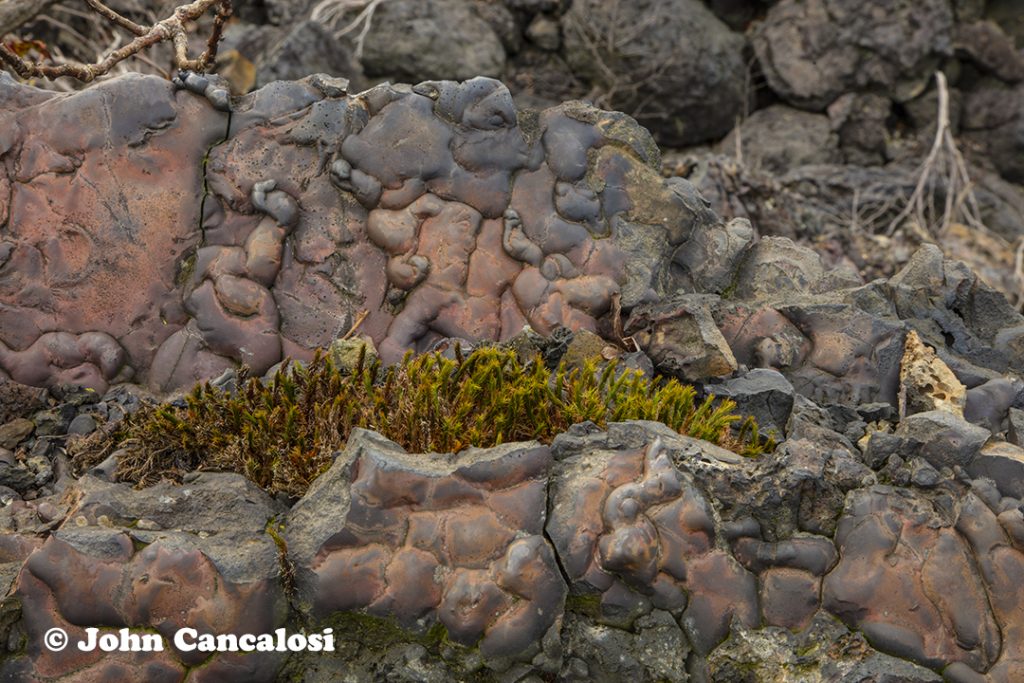 I have pondered ways to communicate, to an often unreceptive world, the lessons that I have

learned about mines, minerals, metals and men. Being a photographer, I decided  to get this

message across in a visual form. I have done so by creating a set of artworks composed of

Buddhists that I befriended. 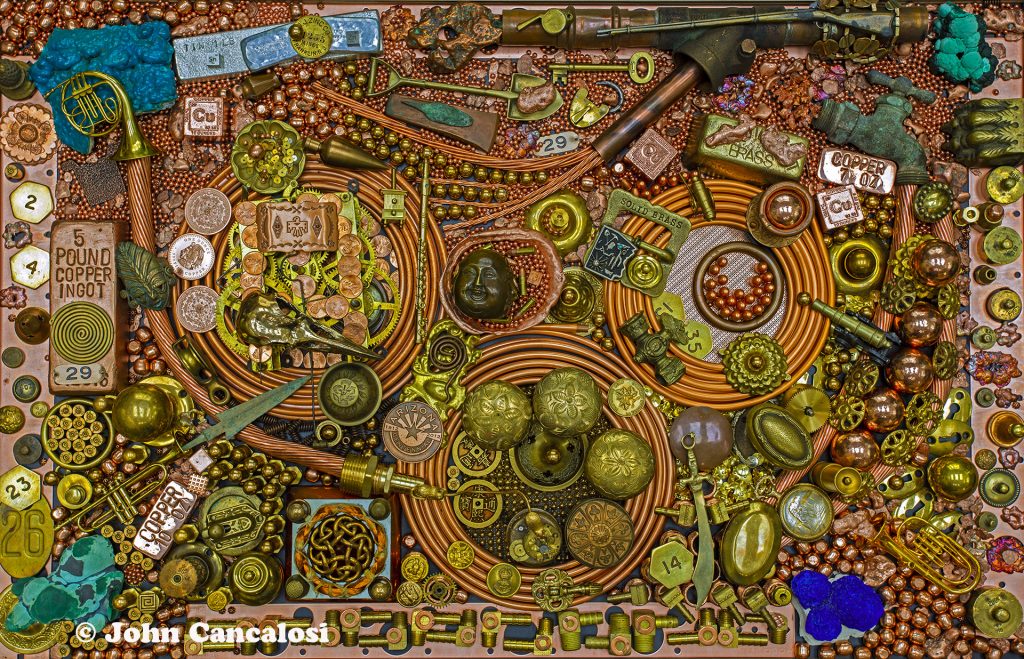 Like my friend’s works they are temporary and are disassembled after they are photographed. I

various uses and vintages to help make the point of how important metals are to us all, even

though we don’t always recognize it. 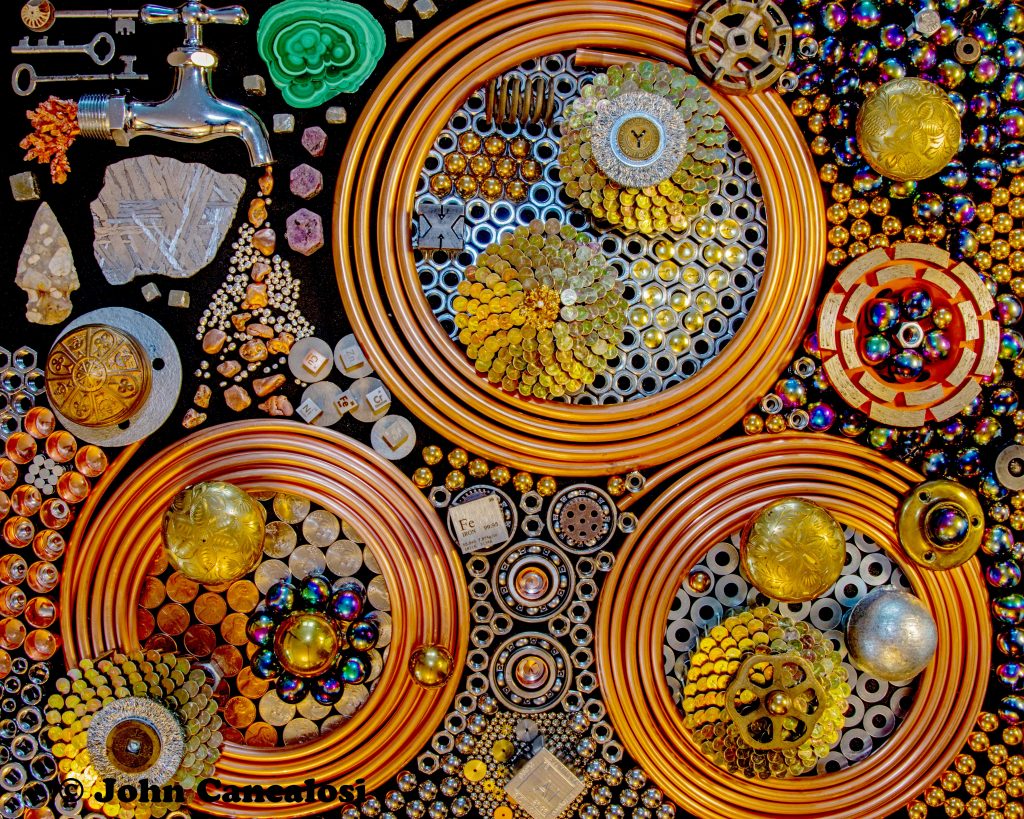 comprise the majority of the basic building blocks of the Universe, but that from them we have

fashioned  the majority of the technology necessary for our survival. 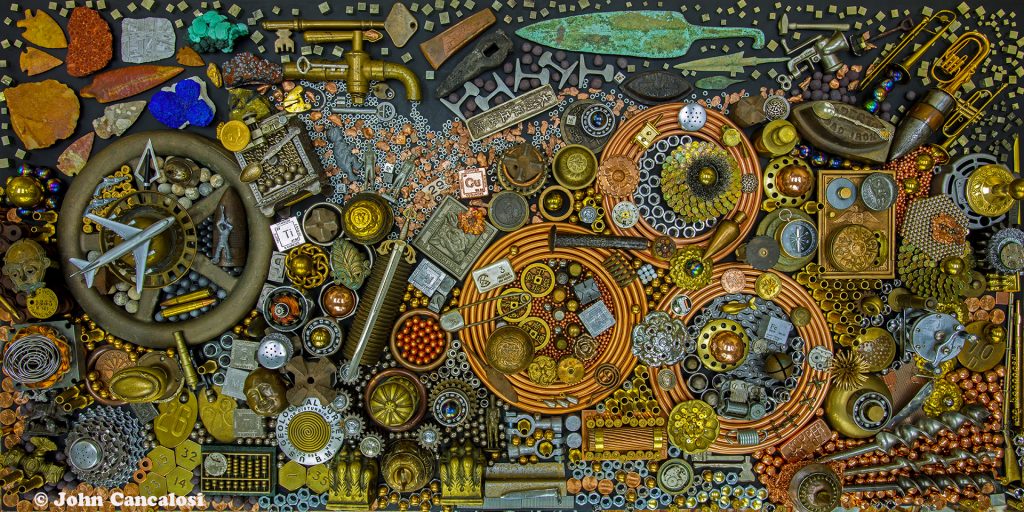 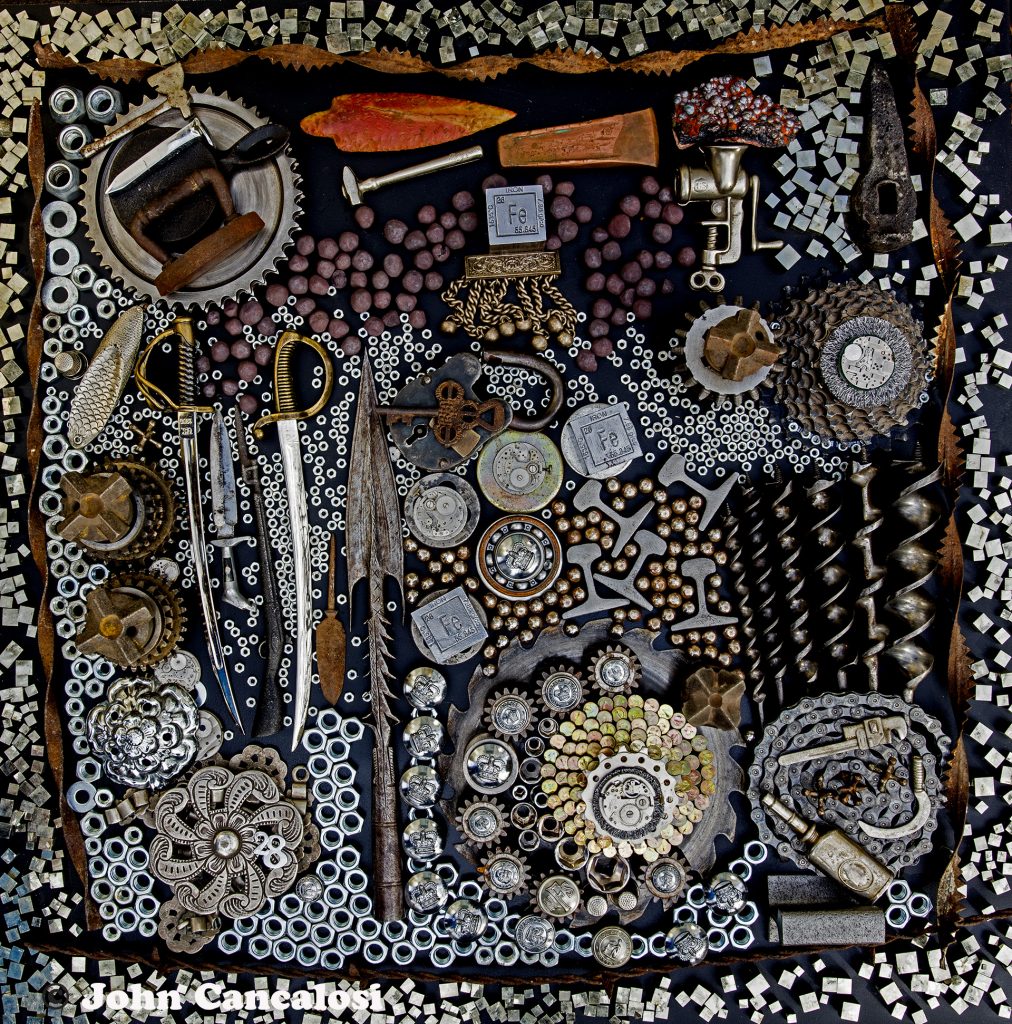