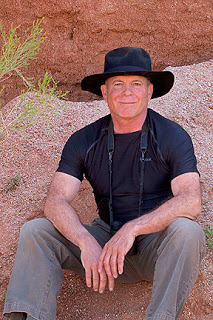 I obtained my Bachelor’s and Master’s degrees in zoology from Colorado State University, graduating with high distinction. I have worked as a field biologist for various federal, state, and private entities. In addition, I have produced and presented independent programs on wildlife conservation shown at schools in several western states.

My photographs have appeared in virtually all nature-related publications worldwide and have been featured on the covers of National Wildlife, International Wildlife, Natural History, Newsweek, National Geographic Explorer, Ranger Rick, Arizona Highways, Living Bird Quarterly, BBC Wildlife and others. I have won numerous awards for my photography, including awards in contests conducted by the BBC (Wildlife photographer of the year), the University of Missouri School of Journalism (POY), the Educational Press Association, Nature’s Best and others. My writings have been published in a number of conservation-related journals including International Wildlife, Ranger Rick, Arizona Highways, Arizona Wildlife Views, Colorado Outdoors and elsewhere.

I enjoy numerous outdoor pursuits other than photography, including canoeing, kayaking, fishing, skin and scuba diving. Sport and fitness are among my interests. I play the guitar and sing, sometimes my own compositions. I enjoy language and culture and am fluent in Spanish and have conversational abilities in French.

My photos are available for publication with the price depending on the intended use. Assignments and lectures, (in Spanish and English) are also possible. Prints are available on a limited basis.