Since I was about ten years old, the words and melody of the Kingston trio’s version of the Irish folksong “Mountains of Mourne” have been affectionately lodged in my brain. I had wanted to go to Ireland for years having liked every Irish person that met. Therefore, it seems inevitable that one day, I would make my way to the Emerald Isle. When I heard that my friend Will Watson, an eccentric English naturalist, was going to Ireland, and could use a field assistant, I jumped at the chance to tag along. Will had been awarded a contract to study saproxylic beetles in Castlewellan Forest Park. As everyone knows, saproxylic beetles feed on dead and rotting wood. In the long history of Irish-American relations, I was probably the only American to visit Ireland on a trip undertaken with the express purpose of studying saproxylic beetles. As fate would have it, Castlewellan Forest Park is near the base of the very Mountains of Mourne that inspired my beloved song. While searching for saproxylic beetles, singing the “Mountains of Mourne” to myself, I began stripping bark off rotten logs. 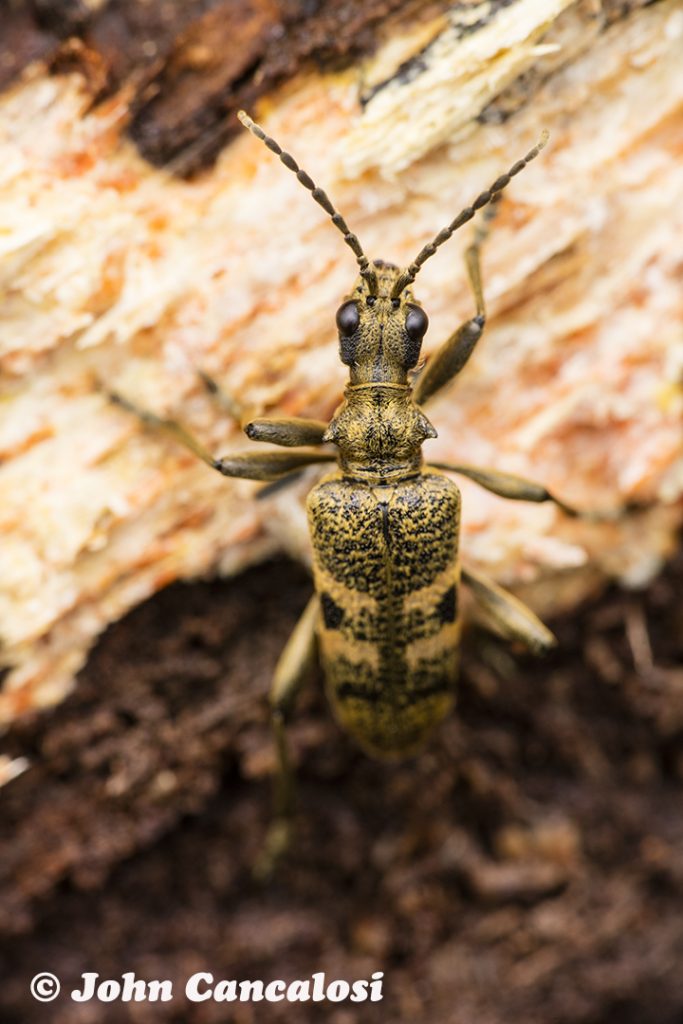 I uncovered the motherlode, a handful of the rather attractive longhorn beetles known as  Rhagium mordax or the Black-spotted longhorn beetle. Having found and photographed the gold standard of Irish saproxylic beetles, I began wondering the gardens in search other photographic prey. Since we were there in October it was pretty slim pickings, but I did manage to locate some photogenic green shield bugs which presented themselves in some rather pleasing arrangements. 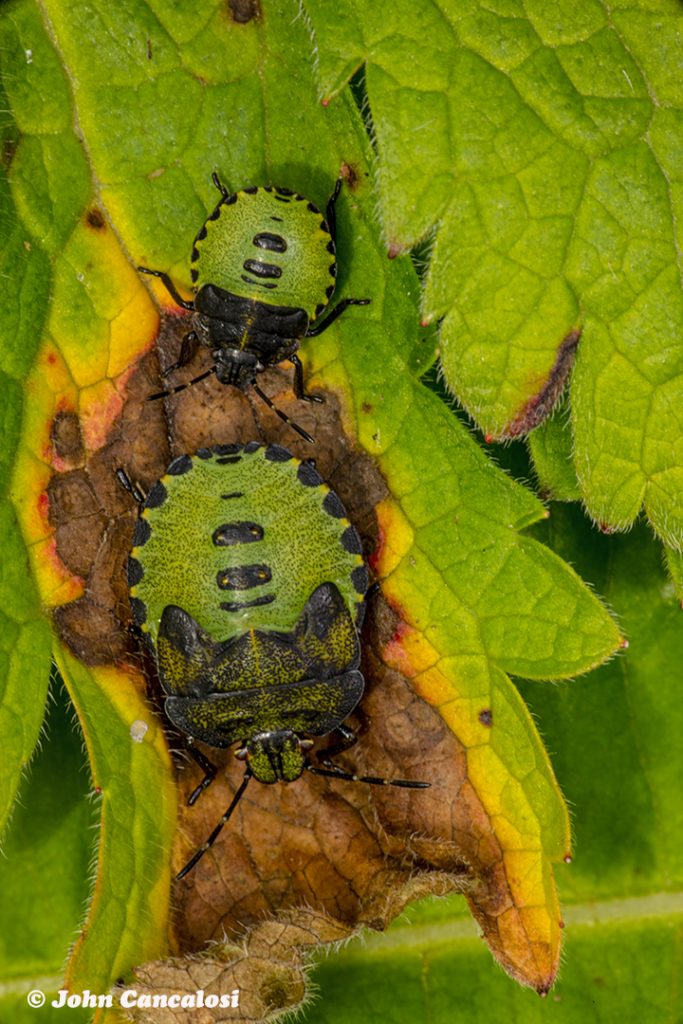 Having located several groups of bugs I returned to the same spots hoping for the right combination of weather, light and bug arrangement.

With photos of saproxylic beetles and green sheild bugs under my belt, meeting the Irish people became my focus. The first person that I met was Alwyn Sinnamon, the head gardener of the Annesley gardens, located within the park.  Adopting my ignorant American abroad mode, I  asked Alwin about the habits of the local leprechauns.  I thought of my questioning as  a bit of whimsical  nonsense, but Alwin told me that there are serious superstitions that influence the locals regarding leprechauns. He told me that Leprechauns are believed by some to dance below hawthorn trees, locally known as  “fairy trees.” I was told in all seriousness that cutting down these trees leads to bad luck. I later met an elderly gentleman walking through the park who gave me a  lengthy recitation of examples of such luck brought on by felling fairy trees.  His examples ranged from being impaled by the falling branches to sudden deaths in the family. I saw fairy trees left in the middle of fields which require special negotiating when plowing time comes. Perhaps the most dramatic evidence that I heard about regarding this superstition was the time when a major highway was rerouted in order to avoid cutting down a fairy tree. 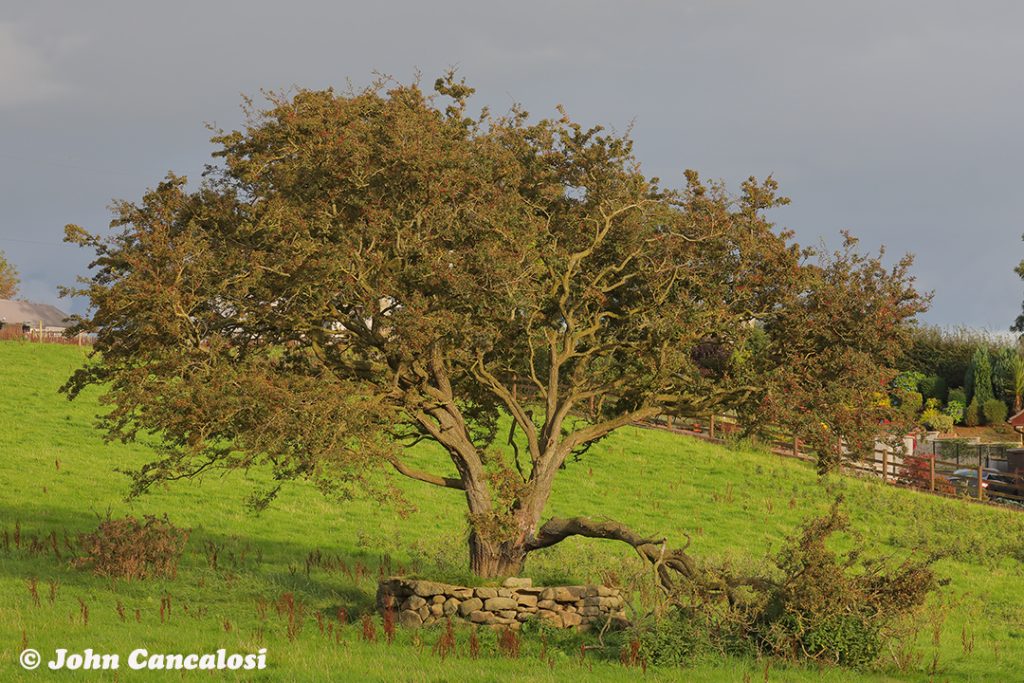 During my conversations with Alwin about Irish culture, I was reminded of the long-standing history of economic disparity and civil strife in the country. He showed me a  photograph of an obviously poor, barefoot, young woman, heavily laden with firewood. The photograph was taken in the 1890’s, on the Annesly estate, (what would become Castlewellan Forest Park), by Hugh Annesley, the resident Anglo-Irish Earl. I couldn’t stop staring at the photograph. Her intense stare somehow pierced my soul and, without words, spoke to me about what it was like to be on the wrong side of the injustice and oppression that dominated Irish history throughout the centuries. I wonder if Annesly was troubled by the vast difference between his opulent life and the palpably hardscrabble life of his subject, living on the same estate. 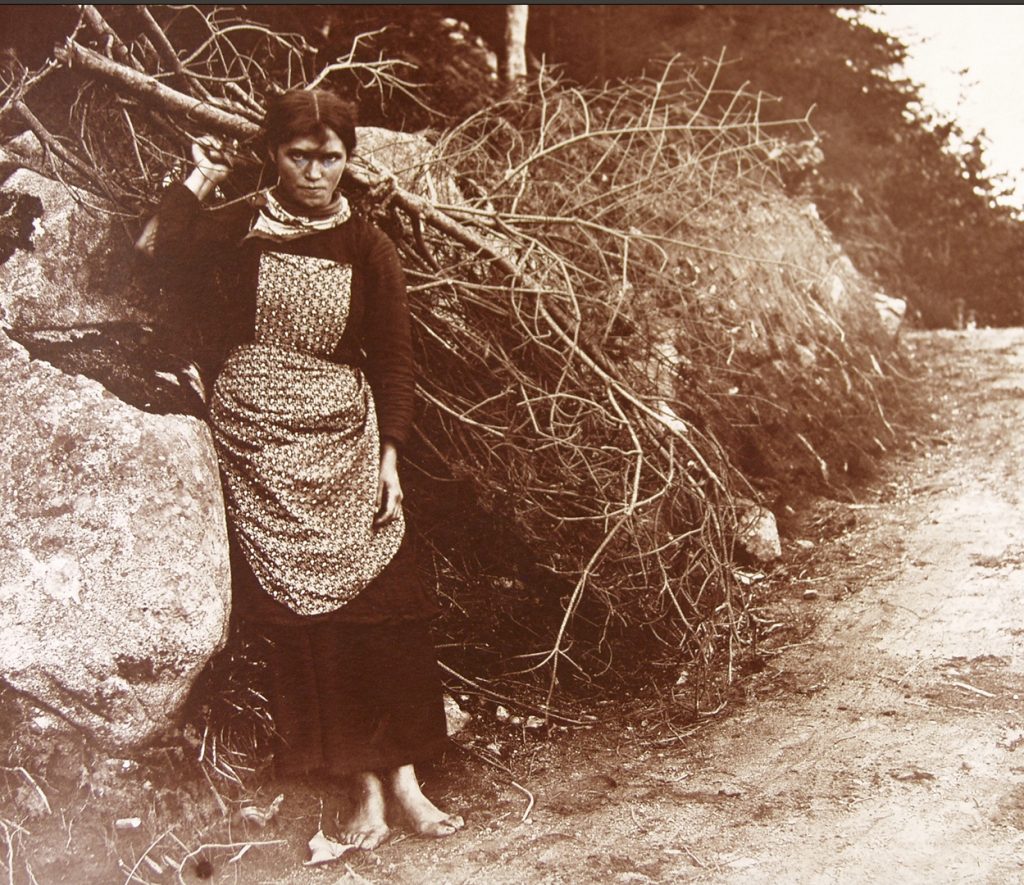 I heard so many stories about historical conflict in Ireland that I got confused. Was it the English against the Irish, the Protestants against the Catholics or the rich against the poor? My best synopsis is the rich English Protestants pitted against the poor Irish Catholics. Things got so bad that over a million starved and a million more fled the island during the famous Irish potato famine between 1845 and 1849, when the potato blight fungus wreaked havoc with the potato crop. Problems didn’t stop there and it is hard for me to imagine that just 20 years ago the Northern Irish were at each other’s throats in the most recent manifestation of this chronic conflict locally referred to as “the troubles”. The violence was at times stupifying. Neighbors killed neighbors, in brutal and cruel fashion.

Given the tumultuous and often violent history of the Emerald Isle, you would think that the people would be warlike and aggressive. What I found was the exact opposite.  Although it is dangerous to generalize, I would go as far as to say that everyone I met on my trip was friendly and unpretentious. I had many pleasant conversations throughout my trip. Most people even laughed at my jokes which is always a plus to me, even if the jokes are often corny. In other words, I really seemed to click with almost everyone that I met. I spoke with many about the political problems of the past and the past is where all that I spoke to would like to leave these “troubles”.  I still don’t get how the warm, friendly nature of the people fits the troubled, violent history of the country.  Then again, injustice can bring out the survival instincts in anyone.

I had the quintessential pleasant Irish experience when I met George Millar of the Irish Rovers, a famous folk group, in a pub in Bush Mills. George and the Irish rovers have traveled the world as  purveyors of Irish music for more than 50 years. He had plenty of stories to tell. One of his yarns that I found particularly interesting involved Nick Reynolds, the lead singer of the Kingston trio, whose voice introduced me to “The Mountains of Mourne”.   According to George, who often played in the same venues as the Kingston Trio, Reynolds was diminutive in stature. In spite of this he had a pugnacious nature, and would frequently initiate bar room brawls, many of which George had witnessed.

I don’t normally frequent places frequented by masses of tourists. However, I made an exception for Northern Ireland. One of the main tourist draws were sites used in the filming of “Game of Thrones,” a television series that I never saw. One of the most popular “Game of Thrones” sites was the beech tree lined lane known as “Dark Hedges.” 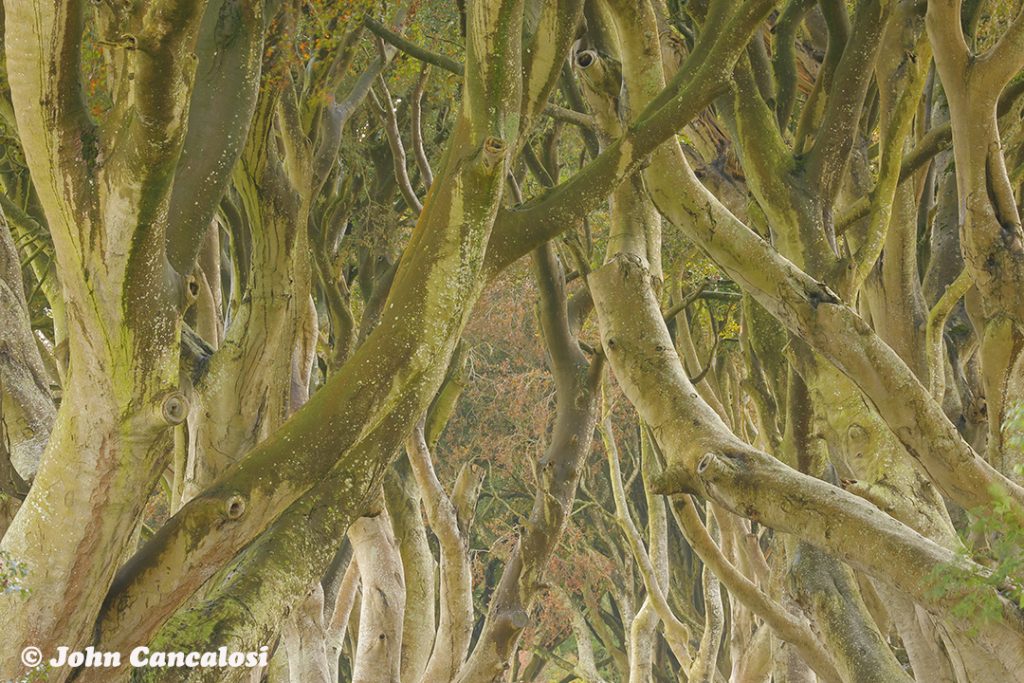 Northern Ireland also boasts one of the most popular geological attractions in the world, the columnar basalt pillars known as Giants Causeway. They were formed during an ancient lava flow. It was difficult photography this fantastic formation, since there were either hundreds of  people climbing all over the formation or there was torrental driving rain making photography next to impossible. I had my best luck right before dark when the place was strangely deserted and I had the magical scene to myself. 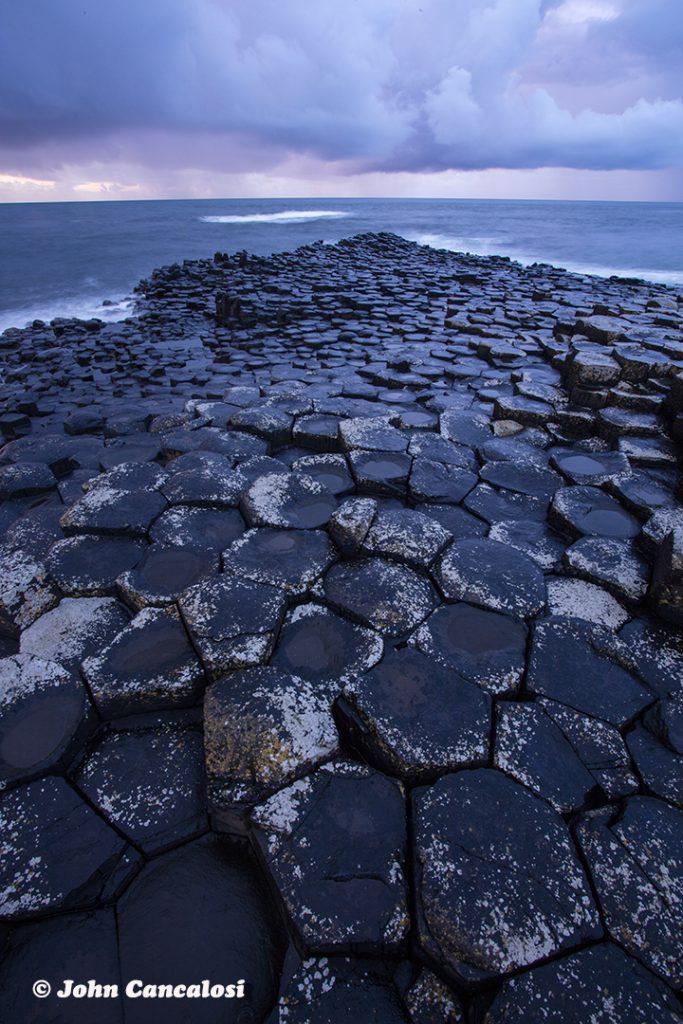 I was so moved by the feelings that the beauty of Ireland and its people envoked in me that I wondered if there was something more to this connection than met the eye. When I returned to the States, I did some geneological research. Unbeknownst to me, my great, great grandfather,  John Smith, was from Ardglass, a stone’s throw from Castlewellan!  Like so many others, he left Ireland for Liverpool during the potato famine. Smith later went to New Jersey where he met his future wife, Mary Kieron, whose family had also fled the famine in Ireland. When I told this news to my friend Alwin, he said that he knew all along that I had Irish blood. Although I never heard anything about Irish blood in my family, while in Ireland I certainly felt it , and now I know why.