Last summer I drove cross-country from Maryland to Southern Arizona and back again. By the time I was half way through the return trip I was very tired of driving and looking for any form of diversion to take away the boredom. Then I hit Kansas and things got even worse as far as areas of topographic and other scenic interest, so I searched for other ideas to break up the monotonous drive and have a bit of fun. It is easy to poke fun at Kansas as being a dull, flat state where the most exciting thing on offer is to watch the corn grow or visit the world’s largest ball of twine. A survey that I read calls Kansas the tenth most boring state in the Union. Somehow being the tenth most boring seems even more boring than being the most boring. When I hit Liberal, Kansas I had a choice, should I make a pilgrimage to the “International Pancake Day Hall of Fame”, or find something else to do. I chose the latter and, for a laugh, I went to the Liberal police station and somehow managed to talk them out of a Liberal Police patch. I’m not sure if I view this prize as representing police that are “liberal” or police policing “liberals”. Given the local political climate I would say that the latter is a more accurate interpretation. However, neither applies as Liberal got its name from an early settler named S.S.Rogers who gave water away for free to travelers passing through, who replied, “That is mighty Liberal of you”. Whatever meaning you might ascribe to it, my prize is proudly displayed on the refrigerator. Next to it is the the equally prized badge obtained in Galena, Kansas, whose meaning is unambiguous: galena is one of my favorite minerals. 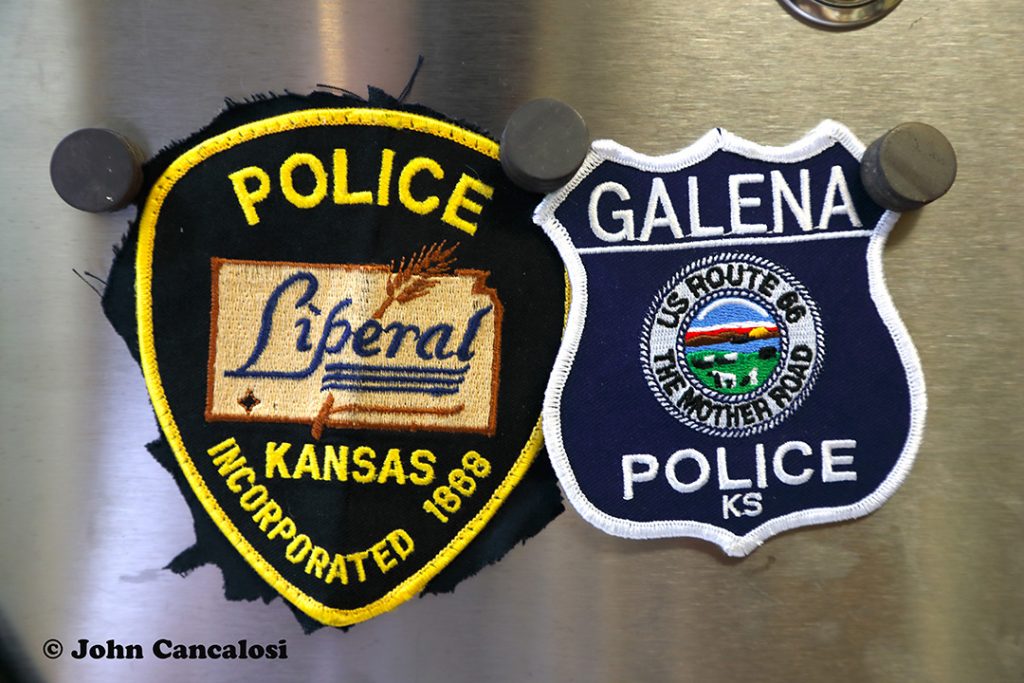 Although it was hard to outdo these police patch adventures, I somehow managed.  East of Liberal the road crosses the mighty Cimarron river. I parked the car and set off  under the long bridge to have a look. Unfortunately the only water that I found in the Cimarron was in the depression formed by a lone cowprint. I was so desparate for stimulation that I  stood transfixed while  photographing and videoing this little puddle for an entire afternoon. I can say without doubt that it wasn’t abject boredom or too much summer sun that had me staring at this puddle so intently. It was what I saw happening in this micro-lacustrine world that still has me amazed. When I first saw this track I noticed a few grasshoppers swimming in it. This didn’t instantly set my curiousity ablaze until I noticed other grasshoppers coming to these already orthopteran-laden waters and themselves diving in. Could it be that the grasshoppers, like me, were desperate for entertainment in these dog days of Kansas? But, cheap anthropomorphism acknowledged, it didn’t seem to be recreational in nature. The hoppers took the plunge, struggled a while and then died. The longer I watched, the more my little puddle filled up with hapless drowning hoppers. I had never seen anything like this and had no idea about what was going on in this bizarre scene.

Months later, I did some research and figured out what must have been happening that day. Turns out larval, parasitic nematode worms sometimes reside in the gut of grasshoppers and crickets. It has been shown that when the worms mature inside their hosts they begin producing proteins that mimic grasshopper nuerochemicals and apparently drive the alien-possessed insects to water where the worms emerge as adults, mate and lay their eggs. These worms have their way with each other with the husks of their former hosts littering the scene. It doesn’t sound like the most romantic scene but the worms don’t seem to mind. By the time adult worms are ready to emerge they must veritably explode from their host’s now useless bodies as they are many times larger than their poor victims. Since I didn’t have a clue what I was witnessing as I photographed this scene, I didn’t notice any worms in the murky puddle-water at the time.  It wasn’t until I wrote this account that I looked closely at the photos that I took that fateful day and Eureka… I think that I can just make out the faint, ghostly outline of one of these bizarre parasites in the muddy water!

Although it might appear otherwise, I actually love the people, places and natural history of Kansas. Where else could you go to find tornados carrying houses away to the Land of OZ, police friendly enough to indulge a flight of fancy or, more significantly, suicidal, alien-possessed grasshoppers plunging into cow print puddles?