Stork in a bag 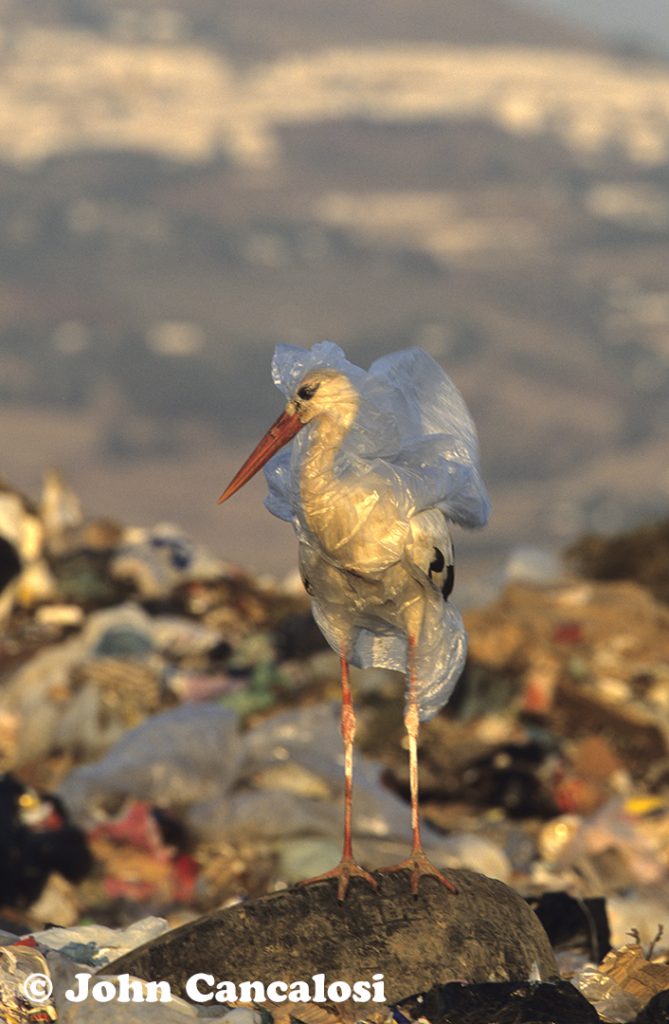 Of all the photographs that I’ve taken in over two decades as a professional wildlife photographer, there is one sequence that has attracted the most attention. It is a series of photographs of a European white stork trapped in a plastic bag, which I took in a dump in southern Spain.

I spent several years photographing storks throughout much of the country. On one trip I was lucky to stay at a friends flat on the ocean. Instead of basking on the beach as any right-minded person would do, I drove 2 hours inland every day to wallow in a putrid dump where storks congregate to feed on food scraps. At first the odor was unbearable,but I soon got used to it. When I paused to eat, it somehow felt really unnatural to throw the trash on the ground, even though I was smack in the middle of one of the biggest dumps in Andalucia!

I had been working at the dump for about a week when I saw a hapless stork, perched on a tire, trapped in a plastic bag. I was thrilled when I was able to drive my car close enough to take a series of photos as the stork struggled to release itself from its plastic prison. With sunset looming, I decided to try to help the bird.

I left the car and started wading through the mess, edging toward the trapped bird. I was surprised that it didn’t move away as I closed-in.  When I reached the bird’s side I was worried that it would lance me with its sword-like bill. I bent down to grab the bag at the stork’s feet. It was a windy day and as I lifted the bag it filled with air and the stork suddenly flew up and was liberated! I will never forget how moved I felt as the snow-white stork rose up into the pure blue sky, free from the squalor below. The stork was given a second life.

The photos that I took that day have since taken on a life of their own and like the bird itself, they have taken flight. First they won prizes in the only two photo contests in which they have been entered: the British “Wildlife Photographer Of The Year” and the University of Missouri’s “Photographs of the Year.” To many, these photos have come to represent the serious problems that plastic bags can cause animals. They have been used around the world, often without my permission, for everything from billboards to books, and have even inspired embroidery art displayed in high-end galleries in London. They have also been sought after by celebrities.

When Oprah used the photo, on the set of her Earthday Show some years ago, it was seen by many people. One of those who saw it was so inspired that she founded a company making reusable grocery bags (in order to minimize the use of plastic bags). We became friends and she wrote to Oprah about the experience and got a free trip to Australia as a result. She tells me that as they walked along the beach, Oprah spoke of how she still remembered the photo. You just never know who’s going to see your photos and what might result.

It isn’t often that life gives you the opportunity to do something to help the things that you love in a significant way. In the case of the stork trapped in a plastic bag, I was blessed to be able to help not just this single bird, but through my photographs, hopefully thousands of creatures that might be saved from similar predicaments, if these photos can help to raise awareness of the need to limit our plastic footprint on the planet. I once bought some reusable grocery bags and after paying for them the clerk actually asked me if I would like them in a plastic bag! We are creatures of habit and it’s time for our habits to change when it comes to plastic. This is a lesson that was made clear to me that day in Spain when the universe opened my eyes, by talking to me directly, through my lens.