Rattlesnake Whispering – Face to Face With Rattlesnakes – Sixteen Years of Living Dangerously – (Not Really, But it Sounds Good)! 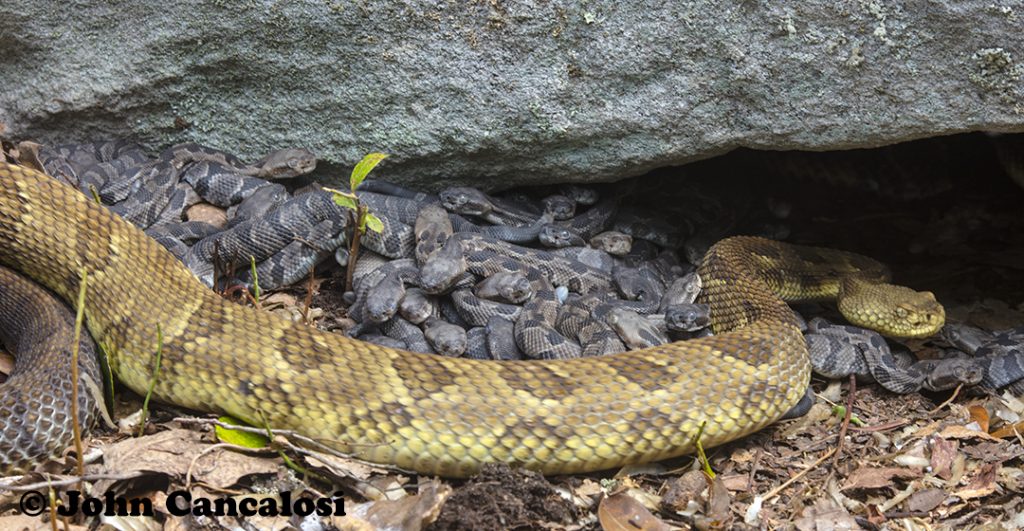 For the last 16 years I have traveled to a remote woodland site in Pennsylvania where timber rattlesnakes gather to bask in the sun, and give birth to their young, en masse, in a reptilian version of a crèche. I have seen as many as 40 females give birth to dozens of young, which the females collectively oversee for the first few weeks of the newborn’s lives. It is a scene rarely witnessed by humans and I consider it my obligation to document these events in photos and video. I have loved snakes since childhood and the snake-lover in me hopes that by showing the public these unexpectedly tender scenes it can help raise awareness of and appreciation for these oft misunderstood and maligned creatures. Whether my motives are virtuous or not, I am passionate in this pursuit and have been known to suffer for the cause. As I write, I am nursing a shattered shin and numerous cuts, bruises, insect bites and stings, a touch of poison ivy as well as a bit of exhaustion from my most recent trip.

I guard the exact location of this and other sites zealously, lest some rattlesnake hunter or other thrill seeker catch wind of the location and disturb the animals that have become like family to me. What I can say is that it lies on a ridge created by the collision of two massive tectonic plates which gave rise to the Appalachians many millions of years ago. This collision caused a buckling of the formerly level strata and formed a series of ridges and valleys. Today harder sandstone, which is resistant to erosion is found on the ridges and softer shales in the valleys. The geology is important to me because it created the South-facing slope that the rattlers seek for optimal sun-bathing. The same geology conveniently left behind a huge sandstone slab under which the rattlers shelter and which is my rattlesnake Mecca to which I make my yearly quasi-religious pilgrimage.

The vegetation is a mixed hardwood, oak woodland, with a few conifers. What is important for the sun-seeking snakes is that there are some openings in this forest. I won’t leave the subject of vegetation until I talk about the understory, which is primarily mountain laurel, which is a shrub with beautiful flowers. That is where the appeal of this species ends for me. Turns out that they can grow in dense thickets which are affectionately know as “laurel hells”  and have been described as “nearly impossible to pass through”. I can now say with authority that they are not impossible to pass through, but my present physical condition, described above, shows that it a’int easy.

I could cut a trail through this brush, but for the aforementioned reason of secrecy, I prefer to travel like the local bears do. There are faint trails at points , but I sometimes  loose these trails and that is where the dreaded laurel-bashing comes in. Even though I have gone there so many times I still wonder how I find the place, so thick is the vegetation in places and devoid of any discernible landmarks, except the bent over tree at the  beginning and dead tree at the end. Why don’t I use a GPS?, you might ask. I did at first, then it ceased working. I have been there so often that I thought, who needs a GPS? I now know the answer to that question and I will be the proud owner of a new one before venturing forth again.  Getting to the site is one thing, but returning to the camp is another. As I approach the snakes, I try to use different routes so as not to form a decernable trail. To be more honest, because I don’t cut a trail, I often wander aimlessly before I reach my destination.  To my credit, I always find it in what, at times, seems like a miracle. When I leave, sans GPS, I almost always have difficulty meeting up with the faint trail, closer to camp, that I used to get there. At this point I often find myself, once again, in laurel hell, wondering what I did to deserve this fate. Fortunately, what I lack in intelligence and technological aids, I make up with sheer determination and a degree of physical strength which get me where I need to go after the requisite shin-smashing, camera-dumping and somersaulting along the way. Its like an extreme workout from Hell… laurel hell.

When I reach my sacred, lichen covered, sandstone snake slab, a fluid, organic, natural tranquility and focus overtakes me. That is unless its a bad year and not many snakes are there or I’m too late and they have already departed for their winter denning sites. On a good year, such as this year, I am greeted by a dozen or more adults and dozens of newborn babies, intertwined at times, like a huge plate of serpentine spaghetti. The females, which are somewhat related, arrive at these traditional sites after they emerge from their winter dens, which are usually not too far away. They spend the summer lounging around and basking in the sun. By so doing they are heating up their bodies. The young which are developing  inside are thereby cooking faster and will be born alive by summer’s end. The snakes are not always out. If it is too cold, they stay sheltered under the slab, which has many nooks and crannies underground. Conversely, when it is too hot and sunny they also go to ground. The trick for photography is to be there when the right conditions for the rattlesnakes and for photography coincide, which isn’t all that often. The rattlers will often share these sites with other snakes including copperheads, black rat snakes and garter snakes. At “my” site, I have photographed rattlers intimately intertwined with eastern garter snakes, their heads resting next to each other for hours of peaceful repose. I only recently read that timber rattlesnakes have been known to eat other snakes, especially garter snakes. I assume that the interspecific rapport that I have observed can only be explained by the fact that gravid rattlers generally don’t feed while gestating. 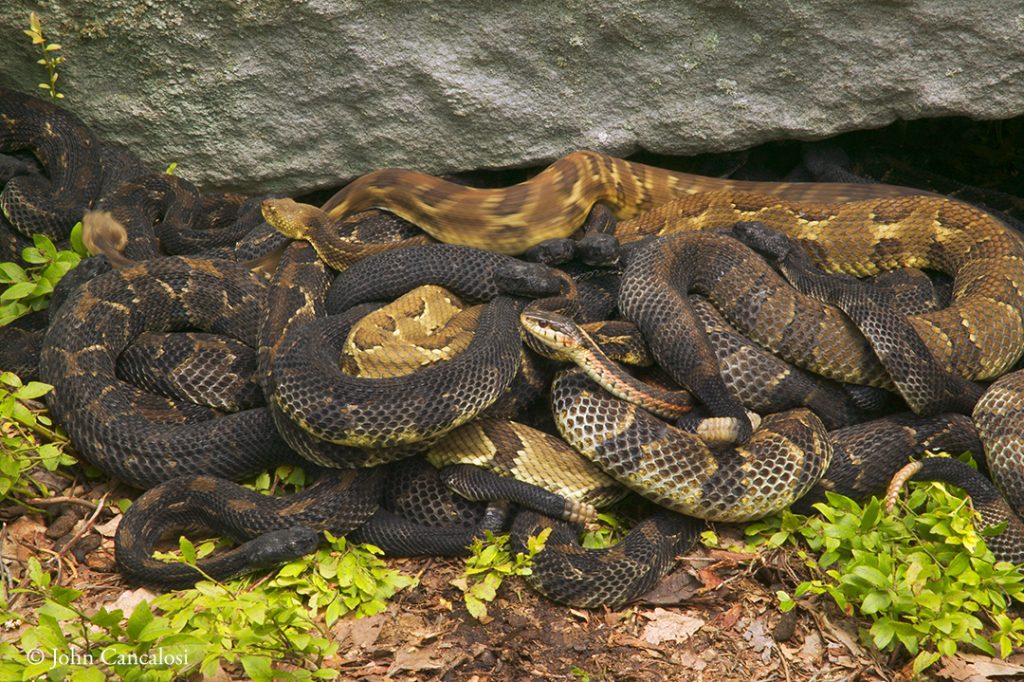 People often ask me “aren’t you afraid?”, “aren’t you in danger?”. The answers are absolutely not and almost certainly not. These snakes are large, possess potent venom and are potentially one of the most dangerous snakes in North America. However, contrary to popular belief, when it comes to humans, they prefer to be left alone. I have trouble with sensationalistic snake heroes that play up the danger aspect to either increase ratings or their egos. When I am with these snakes I am far more worried about me disturbing them than the other way around. Since they can be long-lived, and since I have been there for so many years, I would like to think that they might even recognize me, although most of the time I am hidden in a hide.

I while away many hours, waiting on the snakes and or the weather, and I devote this time to nourishing the local mosquitos and gnats which are a constant presence. Last trip, while laying in wait, I devised a brilliant scheme to even the score with the insects. I saw what I thought was a large horsefly flying around me and noticed that it sometimes passed between my spread legs. In a plan that can only be hatched after hours of boredom, I planned to use my catlike reflexes to squash the quick but unsuspecting insect between my knees. After a couple of hours, my chance arrived and I sprung my trap. Much to my surprise, I actually caught my prey. Trouble was that wasn’t the only surprise. Turns out my horsefly was some kind of big bomber, horsefly-like hornet, which stung me the instant that my legs closed, and yes, it hurt like hell. The marks still remain more than a week later.

At this point you are probably wondering what Elton John has to do with this story and I understand your natural curiosity. Believe it or not, he does play a role in our saga. Last year, a representative of Sir Elton was contacting me to buy a signed copy of one of my photos for his famous photography collection. I had been very busy in the field in Arizona and they had contacted me a number of times and I hadn’t replied. I came back East with little time to spare to visit my rattlesnake maternity site. Just as I was about out the door, to leave for my pilgrimage, I  got an e-mail saying how Elton was there now and we needed to make a decision about the photograph. I quickly replied that I must travel immediately to my rattlesnake site but would contact them later. Since there is no phone coverage in the hills, it had to wait several days.  I contacted them later but never heard back.  Apparently not everyone appreciates the passion that I feel for these snakes, and I bet that this was the first and only time that Sir Elton played second fiddle to a group of venomous reptiles. Turns out that it wasn’t a good year anyway, and I completely missed whatever birthing happened as the snakes had dispersed by the time I arrived.

I have involved my son in this project since he was very young. I took him up clad in hockey shin guards and he valiantly stayed for days, braving the rugged conditions. I gave him the camera and tripod once and he proceeded to take photos that, at the ripe old age of six, won him a prize in the prestigious British Wildlife Photographer of the Year competition.  I on the other hand , have yet to be so recognized for my efforts. I know that he has the bug. Now 22, he met me on location last week, having just returned from his adventures in South America. On our last day, I was just about to let him use the camera, when a turkey vulture swooped right over us and the snakes bolted for cover under the rock. That vulture brought an end to the day and this season. I have a feeling that my son is on his way to becoming a second generation rattlesnake whisperer, which suits me just fine. 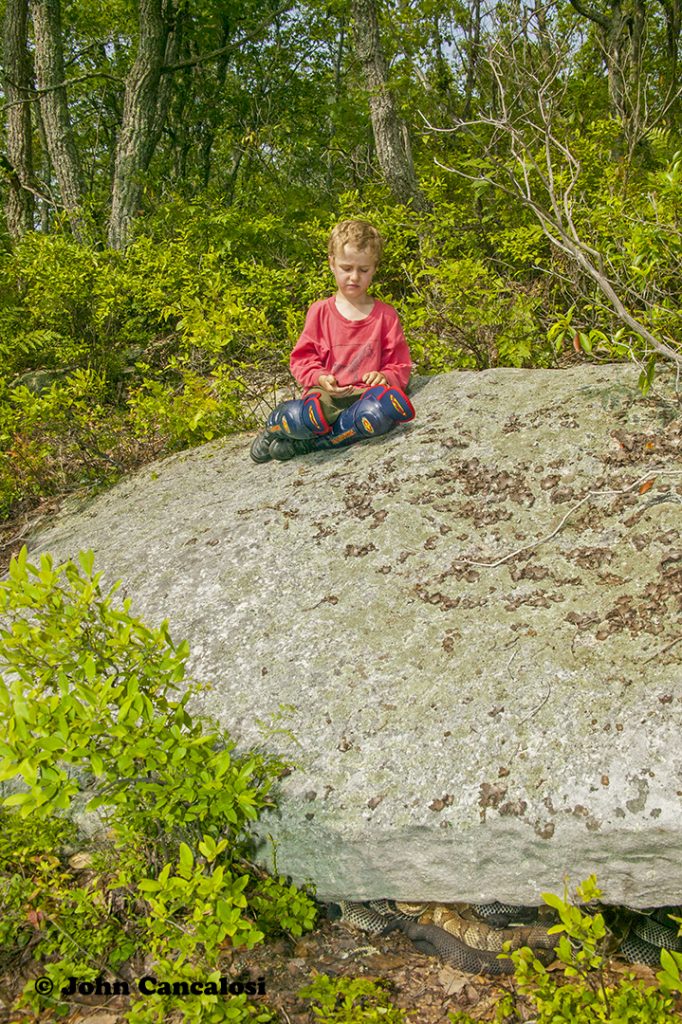