My favorite Sonoran Desert lizard is the psychedelically colored collared lizard.  Collared lizards often perch on large boulders on the lookout for a meal.  They prey on other lizards but also eat insects and other invertebrates.  I once spent two weeks photographing collared lizards in an isolated canyon.  They moved so little from their boulder perches that I might have imagined they were statues.  Suddenly, one rocketed off on its hind legs!  Skidding to a halt, it grabbed a darkling beetle and quickly gobbled it down.  It then went back into statue mode until the next unfortunate creature wandered by. Good things come to those who wait – both collared lizards and photographers. 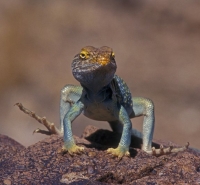