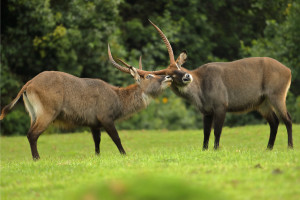 Last summer I went with my wife to her native Kenya. While we were there we traveled to the Kakamega forest in the Western province to photograph monkeys in this primate-rich rain forest. Kakamega is also home to the Luhya people, a colorful tribe who still practice a number of their ancient customs including music, dance, traditional herbal medicine, and wrestling. As a former wrestler, the last is what caught my attention. Every year on Boxing Day, (the day after Christmas), a wrestling tournament takes place where champions are crowned in several weight classes and cash prizes given to the winners.  After a couple of weeks in the area, I became quite well known to the locals and I let it be known that I was interested in meeting some of the Luhya wrestlers. For a laugh, I assumed the identity of Daktari Mzungu Mandazi, which roughly translates to Dr. White-Man-Doughnut. People really seemed to love this moniker and often laughed uncontrollably. As I walked the backroads leading to the forest, greetings of Daktari Mandazi could be heard from the boys tending their cows, (ngombe). One day while visiting a local family on their remote homestead on the edge of the forest, a villager arrived with two “champion” wrestlers in tow. I don’t know how they knew that I was there but, like I said, we and our movements were apparently well known. When the larger of the two wrestlers entered the mud house, he began staring at me with a relentless gaze that was apparently meant to psych me out. You could tell that we were in the boonies because he spoke no English. We had half an hour of conversation in Swahili (which was translated by my wife), with his eyes riveted on me the whole time. We decided to go outside for some wrestling and with a powerful rainstorm brewing, if we were to wrestle, it needed to be done quickly. So we squared off and almost before I realized that we had started, my opponent was on his back with a rather alarmed look on his face. He didn’t want a second round.  He told my wife that he had never touched a Mzungu, (white man), before and found the experience terrifying, which could have been a partial explanation for my sudden victory. Also, from the look in my opponent’s eyes one could see that he was no stranger to the local illegal home-brew call chang’aa which is often enriched with embalming fluid, jet fuel and/or battery acid… not the ideal training beverage for wrestling. In any case, I suggested that we put on a wrestling clinic in a few days time for the 30 or so wrestlers who were said to be part of the local wrestling club.  On the appointed day we arrived at our arranged meeting place where no-one was to be found! We heard that people hadn’t arrived due to church and other obligations.  We later left the area and forgot about the wrestling. Several weeks later we got a call from one of our contacts in Kakamega who sheepishly admitted to my wife that the real reason no-one appeared that day was that they were afraid to wrestle me! That was the end of my Kenyan wrestling career which probably lasted about 5 seconds … but what a 5 seconds it was. I think it now best to retire lest future results not be so favorable. Who knows, I might have to wrestle one of the women that I regularly saw carrying 100+ pound logs on their head for ten miles or so, a feat that I probably could have never done even in the height of my fitness! 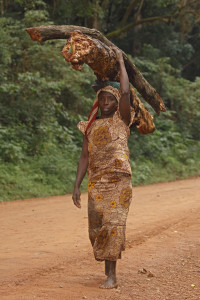 I wish the Luyhas a happy boxing day wrestling tournament from the comfort of my American home and wonder if the name of Daktari Mzungu Mandazi will be mentioned this year?